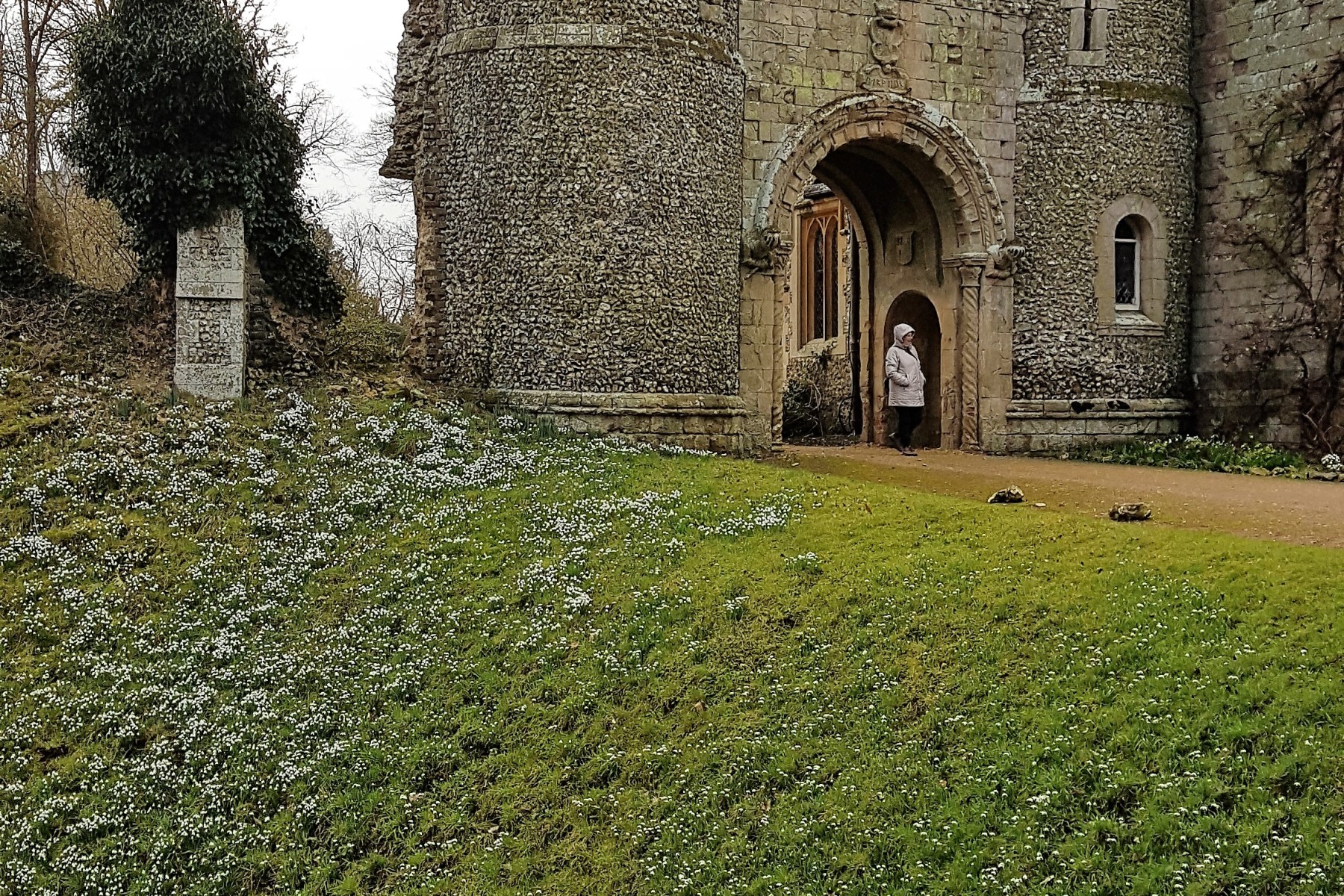 On a fine but cold Sunday in February, 23 intrepid Guild members including their guests met at the stunning spring garden of Benington Lordship the home of the Bott family. We were met by Richard Bott, the present owner, and were given an introductory talk and a short walk through the more formal areas of the garden to set the scene and get orientated for members to make their own way around this Edwardian Garden and old Norman Castle site.

After this introduction Members soon broke up into small groups to explore the gardens in more detail.

Benington Lordship is situated just four miles east of Stevenage in the picturesque village of Benington . The Lordship Gardens spread over seven acres, surrounding a fine Georgian manor house with remains of a Norman Castle and moat. We were able to appreciate this peaceful location, a haven for wildlife and unspoilt views over the surrounding Hertfordshire countryside.

Benington’s known history goes back to Saxon times when it was a fortified site used by the kings of Mercia. After the Norman conquest William the First gave the fortified manor to Peter de Valoinges and the remains of that Norman Motte and Bailey fortification are still clearly visible. The north wall shows some very well preserved flintwork laid in a herringbone pattern and is the only Norman stonework left in Hertfordshire.

The present red brick manor house was rebuilt after a fire in about 1700. In 1832 George Proctor built the magnificent flint gatehouse including the curtain wall and summer house. This romantic folly is the work of James Pulham who was famous for work using his “Pulamite Stone”. This secret mixture was a sort of cement that could be moulded to replicate stonework. Much of his work is now recognised as significant and a great deal of research is now being undertaken on other Pulham features around the county and the rest of the country with features in Buckingham Palace and Sandringham gardens.

In 1905 the present owner’s great grandfather Arthur Bott bought the Lordship and surrounding estate. He built the Edwardian extension on the west side of the house. This included the unusual Verandah which would seem to be a consequence of his work in India as an engineer.

By 1970 the garden was somewhat dilapidated and Sarah Bott with the help of Ian Billot and then Richard Webb spent the next 25 years restoring it to its current state. They have taken great care to preserve its Edwardian character and the informal way it enhances its historic surroundings.

The gardens are best known for the huge drifts of naturalised snowdrops that cover most of the moat and the grounds around the Norman castle and house and it is these we came to see and were not disappointed.

Two species make up this spectacular display, the single Snowdrop Galanthus nivalis, and the double, Galanthus nivalis “flore pleno” but over 200 named varieties are grown around the garden.

Although the tour was to view the extensive array of snowdrops we were also able to admire the Victorian Folly, the Kitchen Garden, the contemporary sculptures, carp pond, wildlife area and the Rose Gardens.

After the tour of the gardens we were able to warm up with a steaming bowl of homemade soup and a cup of tea in the small cafe, exchanging our thoughts on what we had just seen with before making our way back to the cars not forgetting to purchase some special ‘in the green’ snowdrop bulbs on the way out and our journey home. 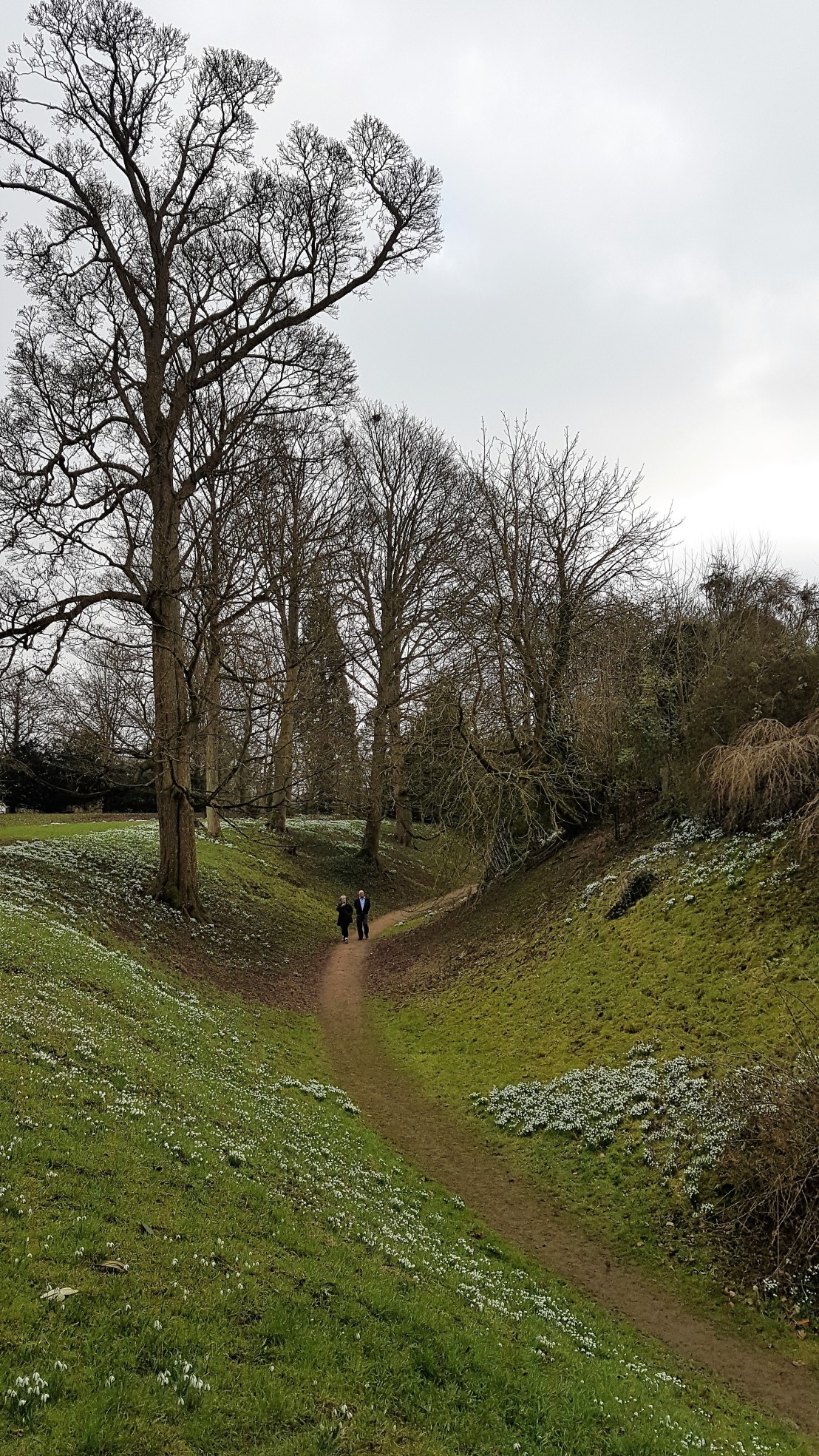